We are having a Virtual Cinema experiment this Wednesday at 2030, screening “Reel Rock 14”. This is a film about scuba diving. No wait….climbing.

Basic concept:
Simultaneous screening of a film with accompanying video and audio chat – what could possibly go wrong. I or Rob P will “drive”.

You will need:
• In advance please register with something called TwoSeven on your windows based device and install anything they want you to install. If you’re not a windows person we may not be seeing you. Mike, this was not a deliberate strategy. I believe it works best on Chrome or Firefox.
• Witty banter 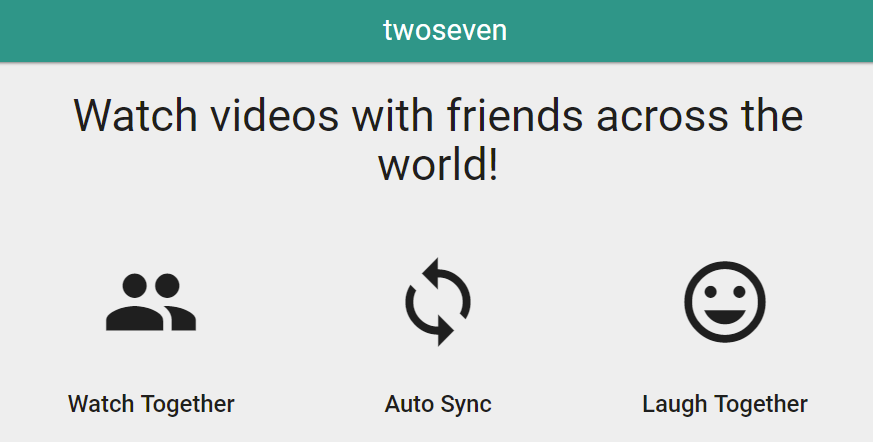 With twoseven.xyz you can watch videos online with loved ones across the world. Watch videos from YouTube, Netflix, Vimeo together while text/video chatting. The next best thing to being together!

How:
• I’ll post a link here and on the NEW Whatsapp group for sharing links to these virtual things. Drop me a line if you’re not on it and want to be on it.

Note - these things are all laptop based but then could be cast / connected to your TV if so inclined.

Think that’s it…
.
Ps I don’t know about anyone else but my home drinking routines are mutating at an alarming rate.

Sounds great! Not sure if my windows laptop will cope (it’s ancient) but might be an option to sync up manually?

mmmh I’ll add you to the whatsapp group and tell you when to press play?

Hi folks - so re tonight’s movie experiment I’ll share link just before say around 2025 (don’t think can schedule it like a zoom call). The extra HDMI cable has arrived so am going for the big screen experience this end.

A suggestion for a 2nd virtual cinema

Dirtbag: The Legend of Fred Beckey

Dirtbag: The Legend of Fred Beckey

This all began when I decided to hand-write a letter that I figured would never be read. I definitely did not expect it to be answered. First, I had to

We’ll try Matt’s suggestion of The Gritual - it’s under an hour and hopefully will stream ok from the vimeo site, as opposed to the last time when we were trying to suck something off my computer.

The Gritual captures one season on the God's own rock: loved by many and feared by more.

Same software as above - TwoSeven - I’ll ping a link around just beforehand.

Still think the Fred Beckey one is worth a watch. Maybe over the BH weekend?

So the suggestion for this coming Wednesday is the " Dirtbag: The Legend of Fred Beckey" which for what it’s worth I think would work well as there’s some great scenery and dirtbagging is a vision of the future for some in this group I’m sure post plague - well, I may speak for myself. Hopefully you can be a dirtbagger and a crap climber at the same time.

Review and list of first ascents of this chap below.

BUT, sounding required please I think everyone would need an Amazon Prime account (not on Netflix), and if you’re dialling in from outside the UK it may be problematic but worth a shot.

Are there enough folk that have an Amazon prime account to give this a go?

Drop a quick note / thumb here to say you’re in so I can see if we have a quorum?

Sounds great but I don’t have Amazon Prime unfortunately

If you’re looking for ideas for films, Underdeveloped is now free on Vimeo and is good for getting some psyche on for Irish climbing - Mournes, Burden, Fairhead etc.

Not that anyone should need the encouragement to visit the best crag in the UK, of course, but still!!!

Great thanks for that - must watch - home turf!

Other ideas that I have watched bits of include -
Zabardast - a mixed team of skiers and climbers go to the Karakoram
“The intimate travel diary of an incredible Freeride expedition into the heart of the Karakoram range. The search for one of the most beautiful mountains to ski on the planet, standing at 5880m. An adventure so remote, so high, so committed that no mistakes were allowed. During five weeks, the crew pushed deeper and deeper inside Pakistan, with a 150 km loop in complete autonomy, pulling sleds filled with food, tents and solar panels across gigantic glaciers. As far from home as one can get. A meeting point of Freeriding and Mountaineering. A true adventure.”
Rotpunkt - Alex Megos and the Advent, the Agony and the Art of the Redpoint
Very very hard climbing and some German climbing history

We have prime and sounds good.

Prime is available with a <a href=https://www.amazon.co.uk/gp/help/customer/display.html?nodeId=201910190>30 day free trial and whilst I’m actually a paying customer right now I have had more than one free trial on the same account in the past so it shouldn’t be a problem if you already did one

Excellent - hopefully that will bring along our fallen comrade