Last year we hosted a charity film night for Climbers Against Cancer.

We are going to host another on *Thursday 16 February from 7pm in the Water Poet, London.

Save the date - more details to come!

Ha thanks. Maybe we can consider touring next @khalidqasrawi. Shame you can’t make it @Tom_S and @naomi_sorrel I won’t wish bad weather on your trip!

You can register your interest for a handy reminder email here: https://goo.gl/forms/b2DuiBvb4bWcU7Og1

All are welcome so bring friends, family and colleagues along and help us raise money for CAC. 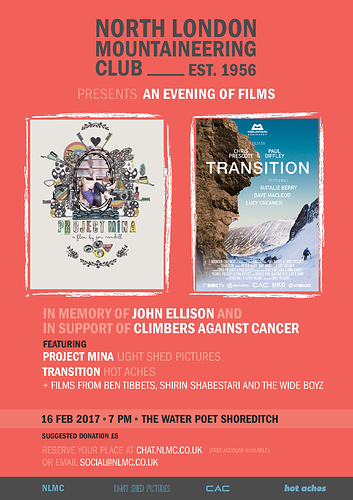 Looking forward to it, Jo!

I don’t think @naomi_sorrel or I are going to be able to make it because we’re planning to be away on holiday next week. If it is so wet we return to London early then we’ll be there.

Looks great! I think this festival should go on a UK tour, similar to
Banff, for the benefit of those of us putting the “north” into nlmc.

Harriet, we’ll look into the possibility of a “North” viewing if you can organise dates / posters etc! We can then have a north / south charity competition and see which “gives” the most.

Imelda and I are coming for sure!

I’ve just got all the films downloaded and ready for presentation. I’m trying hard not to watch them all before Thursday but from the snips that I’ve seen they look great.

If you are going folks, make sure to sign up here to get priority entry on the night.

The Beacon is not North! :-p

@khalidqasrawi, I wouldn’t expect too much competition - you know what they
say about the ratio of a Yorkshireman’s arm length to pocket depth!

We have connections in the Peak Climbing club too (Sheffield) Ian Lau and Paul’s brother Joe. So could spread the word for a northern showing.

A viewing further up north would be appreciated

If you want it further north than N Wales someone else needs to organise but I might come depending where and when!

The event will be downstairs, a few of us are wearing my NLMC red t-shirt so if you get there earlier pop down and say hello!

See you there around 6.30pm for a 7(ish) pm start - late commers are still very much welcome though. You’ll only miss the trailers…

Ooops my mistake it’s going to start at 7.30pm so arrive at 7 or before if you want to secure the very best seats in the house.

Have a great night everyone

What a great night. Thanks so much everyone for coming. We raised £300 for Climbers Against Cancer

Thanks to @jo_keogh for organising.
Thanks also to Jen Randall, Paul Diffley, Chris Prescott and Ben Tibbetts for providing the films and to the Waterpoet for the venue.

I collected a bag that someone left. If anyone is missing it, please contact me. @jo_keogh, please can you pass this message on on the other “social platforms”.

thaNks khalid and jo and co.