Hi, I’m up at the cottage (family walking and bouldering trip so don’t get offended I didn’t say

It would be really good if we could get the shower fixed before we end up with 50 people sharing 3 showers including the barn. Is there anything I can do to help that? We will be leaving on Monday so won’t be around during the working week unfortunately.

Cheers Mike. I’ve reported the shower to the committee, not a hard job to swap in a new isolator but I think the preference is to use a qualified electricians.

I gave the grass at the cottage a spot trim, but wasn’t too long yet. 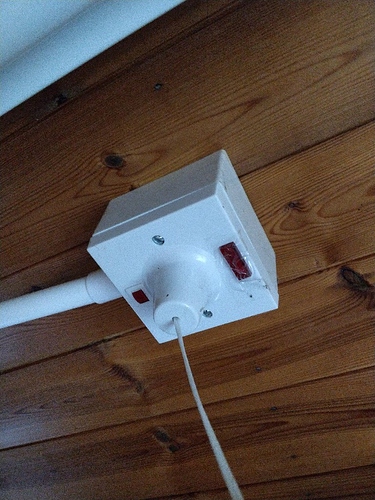 For reference - photo of broken switch. I guess that it needs an electrician to certify the work no matter what and it’s so simple that there’s almost no extra cost in just having the electrician in.

I’ll probably be able to sit in the cottage on Friday if that helps. Was talking to Damian about bouldering and this came up. He might also be available if needed this week.

The other thing which I realise is missing is a small bottle of ecover washing up liquid. Right now we are using one of the refill bottles directly but that will be wasteful since it’s difficult to pour out the right amount.

I ordered a new seal for the coffee maker. Hopefully it comes by the 26th but it might be later.

Thank you for highlighting these, @mikedlr and @Max_A. Much appreciated.

We’re trying to get an electrician out this week to fix (fingers-crossed), and the committee will get on the case for the other items you’ve reported. Thank you for ordering a new seal for the coffee maker.