At some point in the past I noted that the weekend of 11/12 Sept had some good Portland tides for dws, and at some point after that I loosely volunteered to “host” in a sense. So here goes…!

Transport - I don’t live in London any more and since I’d now have to get maps out to work out who would be logical to share with who - can I leave it for people to make their own plans?

Places to stay - there are a number of options on or near to Portland. Bear in mind that early tides mean an early start - I wouldn’t recommend driving down on the Saturday morning because inevitably it’ll take a bit longer than you think and you might not get there in time to get much stuff done. Or at least know what you’re in for which will be a very antisocially early start!

The Redirecting... campsite is more or less on top of the dws, so is where I am staying (weather permitting of course. As a local, if it’s raining I don’t feel that committed to going!).

Plans - the tides are good on Saturday - 2m at 10.21 ought to give climbing for most of the morning. It’s down to 1.86 on Sunday but that’s still enough to get a decent window. If anyone can do Friday morning that’s even bigger. I am camping there Friday and Saturday nights with the family, and will do my best to play tour guide in the mornings.

Psyche - I think there’s a photo in this year’s calendar (August). If that doesn’t look good nothing will!

Any questions, ask on this thread.

Other things to do - it’s Portland, there are lots of bolts!

More seriously - there’s a window to do dws and then it will be gone. But a high spring tide in the morning also means a low spring tide in the afternoon which means easy access to things like Xavier’s Wall or Walking the King at Coastguard, across to Wallsend South, and so on, all of which are accessed from near Portland Bill.

There’s some good coasteering round the through caves and passages by the dws at low tide for people who want to splosh about.

Got a wedding on the Wirral or else I would finally make good on my threat to do some Portland DWS!

Just as an update to this, now that the graphs are out the 1 day detail curves suggests the deep-enough-tide window is from about 9 until 1230-ish on Saturday, so slightly more doable for a very determined Day tripper than I had thought previously. 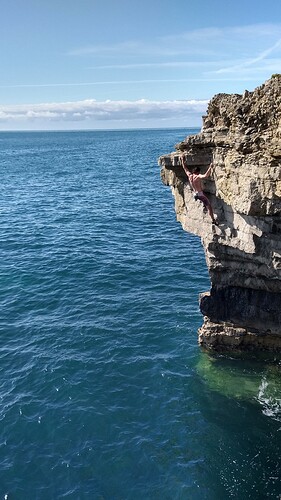